We’re into the depth of winter, filled with cold and snow. However, I’m just back from the National Hockey League All-Star weekend in the warmth of San Jose, California (sorry to rub it in).

While it was a nice getaway, the trip was strictly business, I promise, as the regional NHL Alumni presidents gathered for the annual NHL Alumni Association meeting. The meeting was a full agenda of governess, financials, by-laws, programs, sharing and “purpose”. While all of those issues proved interesting and valuable for the gathering, it was the “purpose” component that provided the most attention.

For those unaware, the purpose of the MN NHL Alumni is to provide charitable support for deserving organizations to:

We are proud that we exist as a mission-centered organization. As mentioned in prior messages, we’ve used our funds for many charitable causes over the years. The one we’re most proud of is our ongoing automated external defibrillator (AED) program whereby we purchase (at approximately $2,000 per unit) and donate lifesaving defibrillators to youth hockey arenas that can’t afford them. Partnering with Advanced First-Aid, Inc., an AED supplier in the Twin Cities, we have now donated approximately 75+ of these valued devices to date!

Just recently, we saw a viral national news story about a pick-up hockey game in North Carolina where a true “miracle on ice” occurred when a doctor saved a fellow hockey player’s life during an informal match.

Jib Street, a native of Canada who has been playing hockey his whole life, dropped in the Pineville rink after he went into cardiac arrest. But, as luck would have it, a fellow player was a medical doctor. The doctor immediately began CPR while others went for the rink’s AED unit. With the doc and the AED, Street was revived and is recovering.

Cardiac arrest is when a person’s heart suddenly stops beating. Unless treated within minutes, the person usually dies because blood is no longer being pumped to the brain and other parts of the body. Quickly shocking the heart with an AED can save a person’s life after cardiac arrest. Experts estimate that each year more than 18,000 Americans have a shockable cardiac arrest outside of a hospital that occurs in public with witnesses. Furthering that statistic, 4,000 Minnesotans suffer cardiac arrest every year.

Hockey arenas are HIGH risk area/sport due to the strenuous physical activity as well as the fact that every third day, a young adult/child suffers sudden cardiac death while playing sports—say nothing of the potential of heart-related incidents with the thousands of adults playing hockey in Minnesota.

Many remember the Dallas Stars incident in 2014 when Rich Peverly went into cardiac arrest during a home game. After Peverley was rushed from the bench, the medical staff started chest compressions and then a defibrillator (AED) was used. These devices have become ubiquitous over the past decade and can restart the heart quickly and easily. Without an AED, Dallas may have been eulogizing him rather than celebrating his recovery. Even closer to home, so to speak, was the death of former Minnesota Wild Player Sergei Zholtok who died on the ice in the arms of teammate Darby Hendrickson while playing for a team in his native Latvia when his heart failed and an AED was not available. 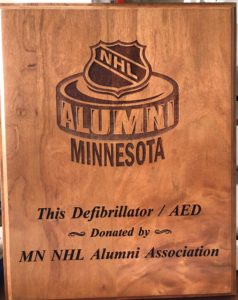 Examples of cardiac-related hockey incidents go on and on so, it’s a fact our program is not only charitable but is truly live saving. From Rochester to Warroad, from Zumbrota to International Falls and dozens of facilities in between, we work with the Minnesota arena managers group to identify rinks that do not have AEDs and coordinate a defibrillator donation to the facility. We try to provide a newsworthy presentation and include a donation plaque that highlights that the AED was donated by our MN NHL Alumni Association.

Our program of equipping arenas with lifesaving AED’s was of major interest to the regional alumni Presidents at the Annual NHL Alumni meeting. Most nonprofits raise money to further their mission—we raise money to save lives.

All the best for a continued successful season.

We invite you to donate now online or by downloading our Pledge Form.

We invite you to donate now online or by downloading our Pledge Form.